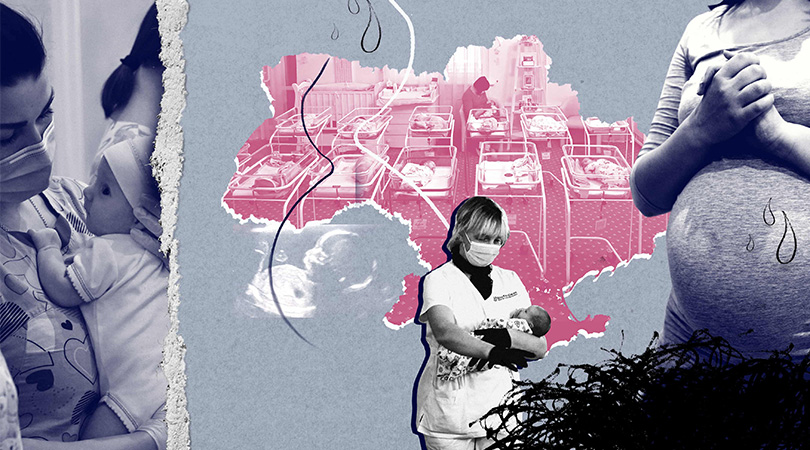 Lockdown exposed the scale of the commercial baby business in Ukraine, and now women hired for their wombs are speaking out.

Some are crying in their cots; others are being cradled or bottle-fed by nannies. These newborns are not in the nursery of a maternity hospital, they are lined up side by side in two large reception rooms of the improbably named Hotel Venice on the outskirts of Kyiv, protected by outer walls and barbed wire.

They are the children of foreign couples born to Ukrainian surrogate mothers at the Kyiv-based BioTexCom Centre for Human Reproduction, the largest surrogacy clinic in the world. They’re stranded in the hotel because their biological parents have not been able to travel in or out of Ukraine since borders closed in March because of the Covid-19 pandemic.

Anxious parents check on the children they have not yet met via video calls, and others have sent audio recordings of their voices to soothe the children.

Care-givers hold some of the stranded infants at the Venice Hotel Photograph: Anastasia Vlasova/Getty Images

BioTexCom released video footage from the hotel in mid-May to highlight the heartbreaking dilemma for parents and to lobby for an easing of border closures.

The babies’ plight made headlines around the world, but a month on, some 50 babies remain in the hotel and the saga is casting a harsh spotlight on the ethics and scale of the booming commercial child-bearing industry in Ukraine.

Mykola Kuleba, Ukraine’s ombudsman for children, has now said reforming a system he described as a violation of children’s rights was not enough and that surrogacy services for foreign couples in Ukraine should be banned.

In a cash-strapped economy however, where the average wage is £300 a month and the war with Russia and its proxies continues, many impoverished women, especially in small towns and rural areas, are still lining up to carry babies for money, even if they are paying a heavy health and psychological price, as campaigners believe.

In Vinnytsia, a city south-west of Kyiv, Liudmyla is still waiting to receive the balance of her fee for giving birth to a baby girl for a German couple in February. She regularly texts her surrogacy agency (not BioTexCom), which she says owes her €6,000. “They keep telling me they can’t send the entire sum because of the lockdown,” she says.

A BioTexCom promotional album showing clients and their new babies

Though Liudmyla, 39, had an embryo transfer in Kyiv and spent most of her pregnancy in Vinnytsia, the agency asked her to travel to Poland to give birth so that the baby could be registered there. Hospital personnel were not aware that Liudmyla was a surrogate mother because commercial surrogacy is banned in Poland, as it is in most of Europe.

“I didn’t want to give her away, I was crying,” Liudmyla recalls. She says that after two days of caring for the infant in the maternity ward, letting her go was a wrench. “But I knew what it was all about.”

A shop assistant and a single mother, Luidmyla struggled for years to find a home for herself and her own three children that would be better than the one room in a hostel that they had. So in 2017 she went to a surrogacy clinic, and with the money she was able to take out a mortgage on an apartment. Even though she was placed in an intensive care unit as a result of complications in the pregnancy, Liudmyla decided to have a second surrogate baby to pay back most of the loan for the flat.

There are no official statistics, but it is estimated that several thousand children are born to surrogate mothers in Ukraine each year. Eighty per cent of these babies are for foreign couples, who choose Ukraine because the process is legal and cheap. Sergii Antonov, a fertility lawyer, says Ukrainian surrogate agencies occasionally organise for the babies to be born abroad because this can make the birth registration process easier.

The price of a surrogacy package in Ukraine starts from £25,000, with the surrogate mother receiving at least £10,000. Intended parents are generally required to be married heterosexual couples and to have proof of their infertility diagnosis. Surrogacy clinics and agencies place their ads in newspapers, on public transport or in social media groups.

Tetiana Shulzhynska, 38, writes to such groups, trying to persuade women to stay away from surrogacy because she thinks some of them end up paying with their health or even their lives. “In a contract, they protect only babies, they don’t care about us,” she says, sitting on a bed in her tiny wooden house in Chernihiv, in northern Ukraine.

Shulzhynska, a mother of two who used to work as a trolley bus conductor, went to a surrogacy clinic in 2013 because she desperately needed to pay back a bank loan. She was so broke that the clinic sent her money to buy the ticket to Kyiv.

She agreed to carry a baby for an Italian couple, and within two months it turned out she had four living embryos in her womb. The biological family decided to keep only one and the rest were removed surgically. In May 2014 Shulzhynska gave birth to a baby girl, which she gave away to the parents. She received a fee of €9,000.

Seven months later she went to a hospital with severe stomach pain. Doctors diagnosed cervical cancer. It took her almost a year to raise money for surgery. Shulzhynska suspects the cancer was caused by her surrogacy, although there is no proof of this. She has recently ordered crutches because her doctors plan to amputate her left leg, which is now affected by the spreading cancer.

In 2015, Shulzhynska filed a complaint against BioTexCom alleging damage caused to her health, which led to a criminal investigation that is ongoing.

Yuriy Kovalchuk, a former state prosecutor whose office oversaw a series of criminal investigations into BioTexCom in 2018 and 2019, says at least three other women went to law enforcement after having their wombs removed following surrogate pregnancies organised by the company.

He says other investigations involved allegations of fraud and even a human trafficking inquiry in 2016, after an Italian couple discovered in 2011 that the children they had taken home were not genetically related to them. Kovalchuk was removed from his post last year and believes the investigations into BioTexCom have stalled as a result. He wrote to the ombudsman’s office in May outlining his concerns about the clinic.

A nurse carries a newborn to meet its parents as foreign couples wait to collect their babies at Hotel Venice. Photograph: Gleb Garanich/Reuters

At Hotel Venice, Albert Tochilovsky, the owner of BioTexCom, does not deny there were mix-ups with embryos during surrogacy procedures in 2011 that led to the human trafficking investigation.

He blames the error on a lack of experience when the clinic was only a year old, and says: “I don’t think it was only us who used to make mistakes here. If someone starts checking DNA, there will be a lot of scandals.”

He claims that in at least three cases parents rejected surrogate babies after they were born with health problems. The best-known of them is the case of Bridget, the daughter of an American couple, who was born in 2016 and now lives in an orphanage in Zaporizhia, in eastern Ukraine. “It was a tragedy for us,” Tochilovsky says.

Albert Tochilovsky, the owner of BioTexCom.

The company’s website advertises “the best surrogate mothers” and Tochilovsky denies mistreatment of any women or any fraud at his clinic. He dismisses Shulzhynska’s cancer claims as “nonsense” and says the firm gives contractual protection to surrogate mothers.

“They [women] didn’t lose their health at my place, it happened in maternity hospitals. Our clinic does reproduction technologies, the other procedures are being done at state centres [hospitals] … In many cases we pay compensation. If a womb is removed, we pay [compensation] for this according to the contract.”I

Surrogate mothers are self-organising on social media, where they share advice and warnings about surrogacy agencies. Svitlana Sokolova, a former surrogate mother and now an activist at the NGO Strength of Mothers, which helps surrogates, says she started receiving more complaints about alleged mistreatment during the Covid lockdown. One group of women said their contract obliged them to keep having embryos implanted in their wombs for a year until they got pregnant. “Through this contract, the women became a kind of property,” she says.

Maryna Lehenka, a lawyer at La Strada Ukraine, says the charity’s hotline gets around 100 calls a year from surrogate mothers complaining about the stress they experience after giving away babies or problems caused by the hormones they took to increase the chances of pregnancy. She recalls a case when a woman went into hiding in a village because she did not want to give away a surrogate baby.

Lehenka agrees with the ombudsman that commercial surrogacy should be banned in Ukraine. Sokolova, who co-owns a surrogacy agency, argues instead for a proper legal framework that would protect the surrogates. “Otherwise, it will just go underground.”

Despite pressure for regulation of the surrogacy business – there are several draft laws before parliament – experts and insiders doubt major legal changes will be made anytime soon to curb the baby business. Tochilovsky says that if commercial surrogacy became illegal, his clinic would just refocus on embryo donation. “The world’s future is in biotechnology, and most of the money will come into biotechnologies,” he says.

Olga, who is on her second surrogate pregnancy, twins for a Chinese couple, waits in a rented apartment in Kyiv.

Olga, 26, is going to have her second set of surrogate twin boys for a Chinese couple later this month. To give birth, she came to Kyiv from a town in north-east Ukraine along with her young son and husband, and was placed by the agency in a new flat within walking distance of the maternity hospital. Olga says she is feeling fine and she meets sometimes with three other pregnant surrogate mothers living nearby. Using the $17,000 (£13,500) she will get for the babies, Olga wants to open a coffee shop or a flower boutique back home. “I didn’t kill, I didn’t steal, I made this money in an honest way,” she says. Her son sits next to her; he calls the expected babies “Kirusha and Kirusha”.

Meanwhile, new babies born to surrogates arrive at BioTexCom almost daily and are placed in the hotel’s makeshift nursery. A group of Argentinian and Spanish couples, some of whom travelled before lockdown, were joyously united with their babies last week, but it is not yet clear when Ukraine’s borders will officially reopen and to which countries.

Rafael Aires, from Spain, carefully takes his daughter Marta from the baby room to play with her. Aires arrived in Ukraine before the lockdown and has been held up for months, his wife back in Spain. But the complication has not tarnished the couple’s happiness. Aires had been trying for a baby for eight years. “And now,” he says, “ta-dam.” 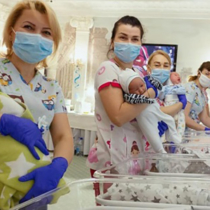 Dailymail: 46 babies destined for parents in Britain, US and other countries lie stranded in Ukrainian hotel due to coronavirus lockdown